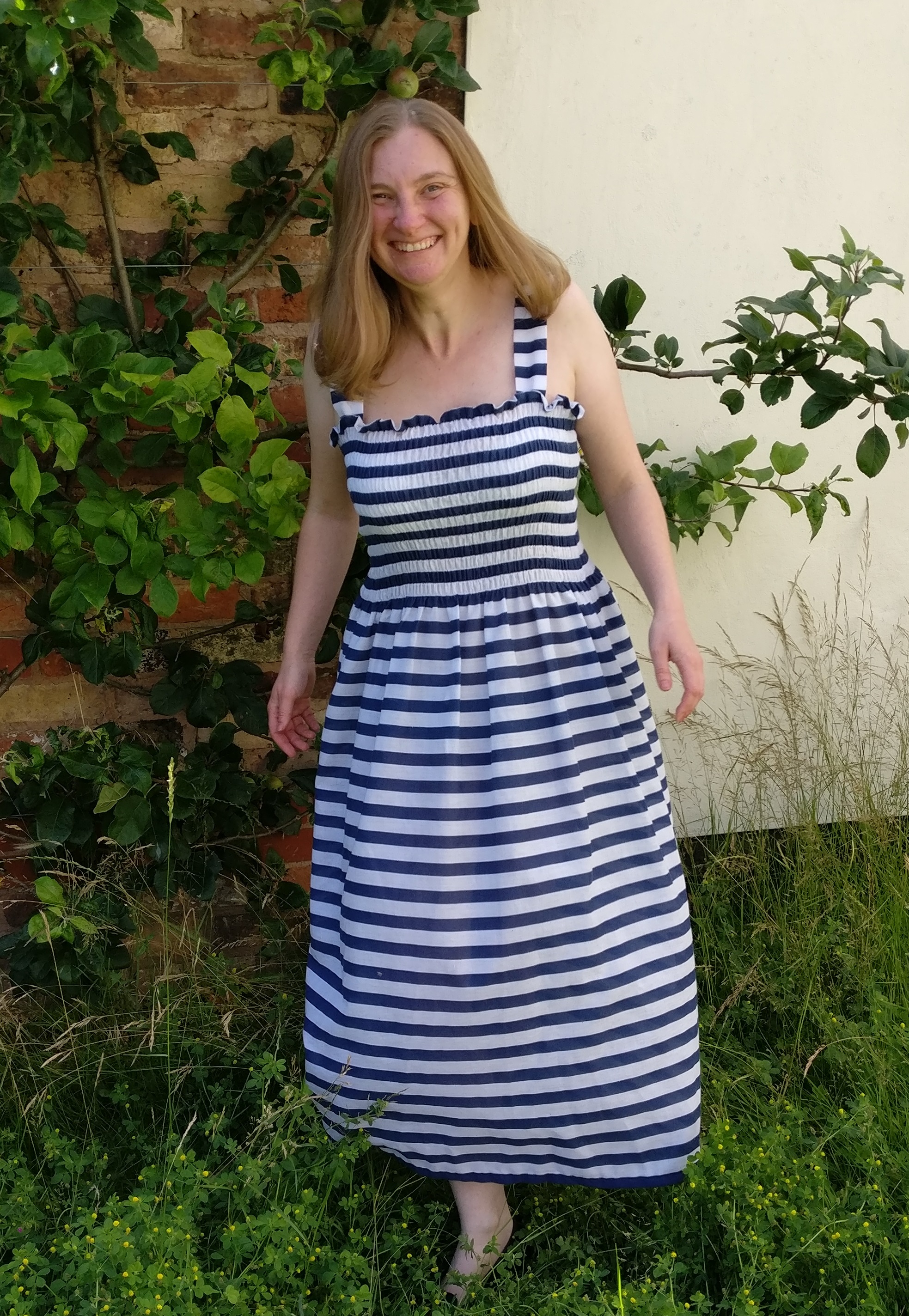 When I bought fabric for my daughters shirred dress I decided that it would also be useful practice to make a dress for myself following the adult version of the pattern from the Great British Sewing Bee Fashion with Fabric book. (OK, so I’ve had my daughter asking me for years why I don’t wear dresses more often, and I succumbed!). As such, I also bought 2m of some very cheap striped navy and white cotton (or poly cotton?) with the intention of turning it into such a dress. Six-months down the line, and I actually started this project. When I showed my husband the material to ask whether the stripes should be vertical or horizontal, he laughed, and said that it didn’t matter, as I was going to look like a deck-chair either way, so now it’s the deck-chair dress!

Obviously the first step with any project is to wash the material, but I’m going to confess here, this is the first time I’ve actually done this, and yes, I did it because there’s been some slight movement on some of my previous makes. Well, at least I’m learning from my mistakes 🙂 Wow, am I glad I decided to wash this material! When I initially bought it, the white was stark against the dark navy, and the navy stripes were really stiff from the dye. After several washes (yup, several) I think the colour will no longer run – the navy isn’t quite so dark, and the white? Well, it’s not quite so white either. Now normally I would be disappointed about this, but this time, I’m quite pleased – the colours are slightly less stark and more gentle, so hopefully I look slightly less like a deck-chair than anticipated!

My plan for this dress was always that it should just be worn around the house on hot days, as such, it doesn’t really matter that it’s not the most flattering shape for me, I just wanted something that was cool and comfortable. The ladies version of the pattern was pretty close to what I wanted, but I always wear a bra, and I don’t like bra straps to show. I therefore decided that instead of the spaghetti straps I would go for wider straps.

Nice but impractical spaghetti straps from the pattern

Then I realised that with these larger straps, I wasn’t sure where to put them – and I didn’t see how I could know where to put them to ensure they covered the bra straps, until I’d completed the shirring and basically finished the dress. This led to the construction of the dress being slightly different from that in the book.

I cut out the size of material suggested in the book, did the shirring, and then sewed the side seams using an overcasting stitch. All this was done with white thread, but the hemming required navy thread – but which one from my stash should I choose? (I think maybe I can stop buying navy thread!)

How many “navies” does one girl need?!

Following this, I hemmed the bottom of the dress – so far so good.

Completion of the lower hem using the blind stitch foot

I then made the straps – I wasn’t quite sure how long I needed these, but I did know I didn’t need them to be adjustable (I’m pretty certain I’ve stopped growing now 😉 ). I draped a tape measure over my shoulders, and measured from the top of the bra at the front, to the top of the bra at the back. This ended up being an accurate measurement, but as I’d measured myself, I decided to make the straps slightly longer and then cut them down as required, as I really didn’t want them to be too short! I decided I wanted the straps to be approximately 4cm wide, so cut two 10cm wide rectangles of material, as I say, allowing a few extra cm in the length for any inaccuracies, and also of course adding 3cm for the seam allowances. These were then sewn and turned the right way out. The next step was to hem the top of the dress and incorporate the straps into this hem (is it called a hem at the top of a garment?! it somehow seems wrong!)

That sounds so simple, does it not? Well, it wasn’t. Let’s just say, there’s a reason why you hem the top and then do the shirring – it’s intensely fiddly to fold over the hem when you’ve already got the shirring elastic in – then to add into that, placing the straps in the correct position, and ensuring they’re not twisted? Well, it ended up being thrown across the desk in frustration on more than one occasion!

Top hem – many pins, and much patience required

Lots of pins and time later and the end result was this:

Side view (Yup, I know you can see the bra strap, but the stripes are perfectly aligned 🙂 )

The end result is something I’m very happy with. I don’t think the shape flatters me – I don’t need any extra weight around the hips, and this style gives it, but what do I care, it’s incredibly comfy, super easy to wear and fits my requirements (something cool & comfortable to wear around the house) in spades. What I didn’t expect is how much I would love the swooshiness of it – I feel like a little girl and want to do a twirl every time I wear it 🙂

PS – Yes, I know the top picture makes me look like I’m pretending to have one leg, and I’m waiting for William Tell to shoot the apple off my head! What can I say – I’m not a natural model, and my husband isn’t a professional photographer, but it’s all part of the fun 🙂