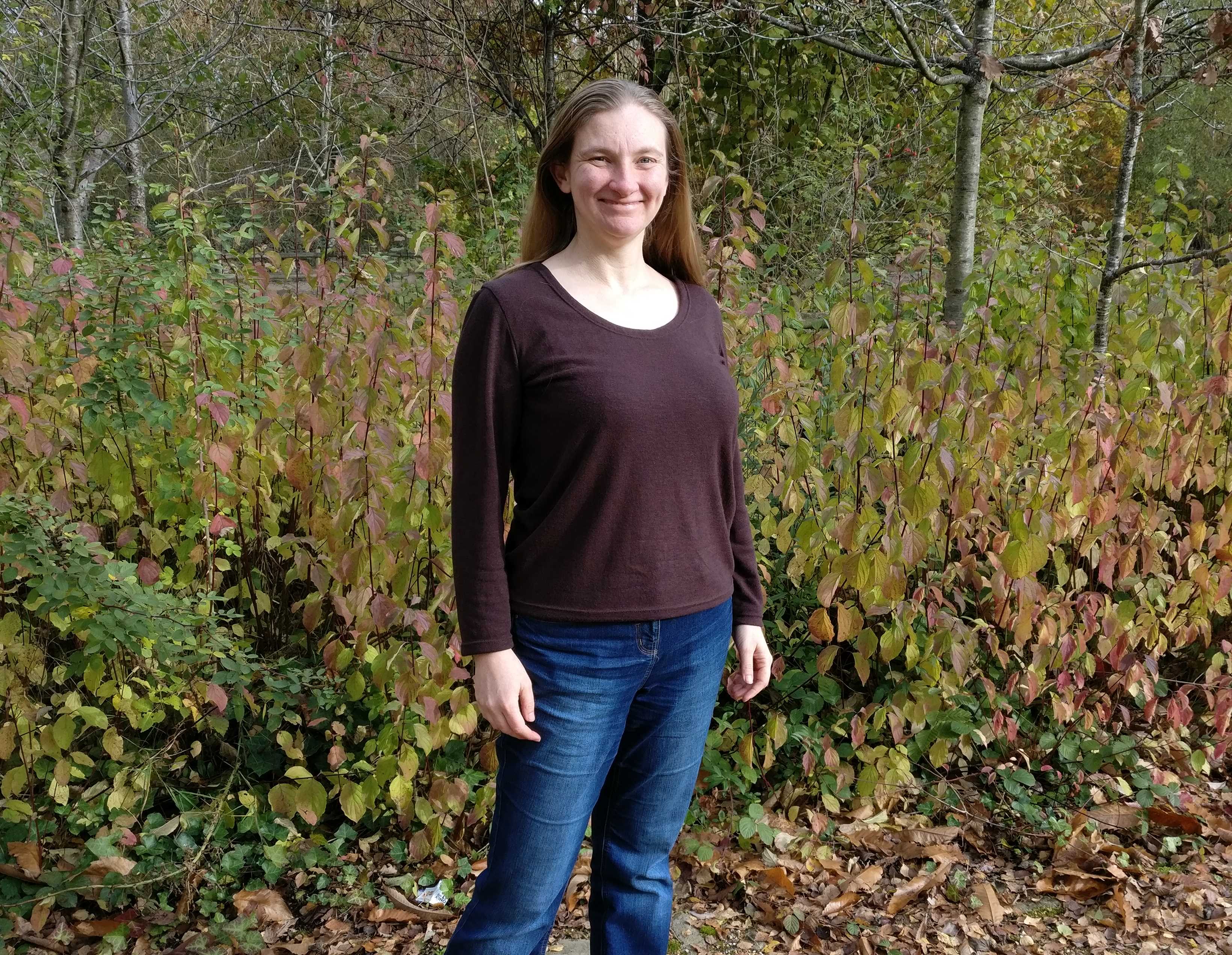 I don’t know whether every sewist is the same, but some patterns hang around for a long time in my pattern stash waiting for their time in the sun. This pattern has been waiting patiently to be made for 25 years – but it’s finally had its turn, and I love this pattern! It’s a pattern from Prima magazine, from November 1991.

My mum bought Prima fairly regularly back in the ‘90’s, and between us we kept some of the patterns (although not all unfortunately). This pattern has probably been overlooked for a couple of reasons – the first being that it’s described on the sheet as a sequin top. That’s probably not that off-putting for most people, but I don’t really do sequins – in case you’ve not noticed, I very rarely do patterns, let alone sparkles! The second reason is that I don’t have the instructions for the pattern and also it’s designed for knits – so with my very limited experience of sewing knits, I’m afraid it’s just lurked at the bottom of my pattern box.

A while back however, I picked up a remnant of a brown woolly knit material – I’ve no idea what the material is, but comparing it to my ready to wear jumpers, I would guess it’s a lightweight acrylic. I’ve looked at the material for a while, wondering what I can do with it, and then I had a surprise few days to myself. I didn’t really feel up to actually sewing anything (I had chicken pox!) but I decided I could cut out a few pattern pieces every so often. Looking at the material and the pattern, it appeared that a simple round necked jumper would work in this fabric, and I thought I could probably guess at the construction. To aid me with the construction I decided to use the sewists favourite sewalong – the Coco from Tilly and the Buttons – figuring that the Prima pattern is very similar to the basic Coco.

I reinforced the shoulders with a couple of short lengths of ribbon that were probably cut out of another top. I used a 3 step zigzag stitch for this, ensuring the stitch width was almost as wide as the ribbon. In the image above you can see the stay-stitching around the neckline and armscye; I wasn’t sure whether this is required on a knit, but I decided it couldn’t do any harm! I then sewed the shoulder seams, inserted the flat sleeves, and sewed the side and sleeve seams. The seams were all sewn with what appears to be called a lightning stitch in the blog world. This worked well and gave stretch, but I did find that it was a bit too easy for the material to slip and gather on the thread. I think it would probably have been better to have used the three step zigzag stitch, or stretch overcasting stitch (obviously if I had cut it without so much seam allowance).
I then used my twin needle for the first time on a real garment, and it worked wonderfully (stitch length of 3.5mm and thread tension of about 3.25.) The only problem I had with this was that it didn’t like going over the seams where there were many layers of fabric – I don’t think it was the thickness that was an issue, so much as the change in the thickness. I didn’t snap my needle until I had completed the last stitch though, so I’m considering it a win!
What I hadn’t reckoned on was the facings – I’ve used facings before but never in a knit. I didn’t know what to do about interfacing them, so I left that off figuring that an inflexible interfacing may make the neckline non-stretchy, but other than that I constructed them as a woven facing, notching, clipping and understitching in the same manner. This unfortunately left the facings flopping about and coming out of the neckline looking more like a ruffle than a smooth neckline with a facing! As such I decided to topstitch the facing and the outer layer together around the neckline with the double needle in the same way that I topstitched the hem and the sleeve hems. I’m really pleased with the result, the neckline lies nice and flat, and I didn’t get too much tunnelling from the twin needle stitching.

Despite the difficulty with the facings I’m definitely going to be looking out for more material to make this pattern with – I need to learn to do the facings properly, (I have since found out that you can buy knit interfacing) and also I would like to narrow and lengthen the sleeves a little at the wrists, but other than that, this pattern is one that fits my usual winter dress style very well – I spend a lot of time at home and work wearing lightweight jumpers and either jeans or a skirt, so it’s great that I’ve found a pattern that I can use to make them – it’s just a shame it’s wasted 25 years in the pattern box!

This site uses Akismet to reduce spam. Learn how your comment data is processed.